American Kenpo has a base system of 154 self-defense techniques. Requirements for belt ranks vary between schools some requiring 12 techniques per belt whilst others are 24, 16, or as high as 32 per belt.

Whatever the number of techniques required the practitioner should always practice them with a goal in mind. By using a training partner we can practice set or ideal phase combat situations. Scenario training should become a valid and important part of your training, it enables you to practice situations that you may encounter on the street.

Bearing in mind that Kenpo techniques are taught as a solution to a possible problem, it makes sense to use self-defense techniques that would work in an actual situation. 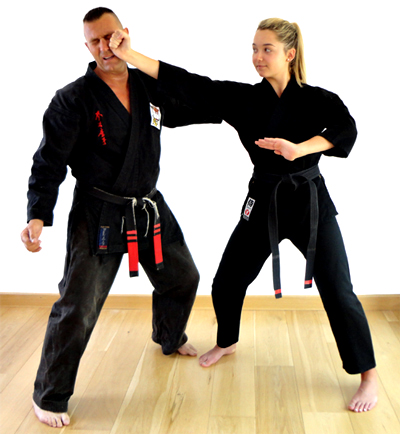 Techniques can be divided into 3 main categories.

1. The first is the theme of the technique, the idea behind it and why it would function in combat.

2. The second is the actual physical application of the weapons employed to hit target areas.

3. The third is the principles to each move contained within the technique.

Remember techniques are a case study of motion, they are set scenarios for a martial art practitioner to develop key principles of motion. Techniques allow the development of speed, timing, correct breathing, as well as other areas of the art such as the application of checks and specialized weapons to targets. Techniques are no more than basics that are arranged into choreographed fight routines. The benefit of which allows the martial artist to improve their fighting ability and skill level. 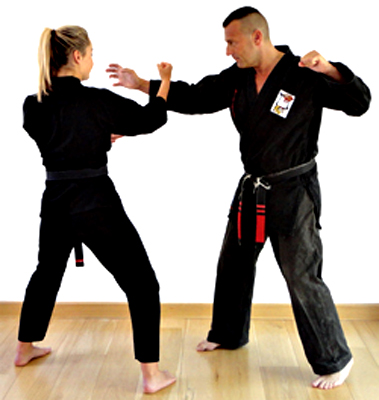 The study of martial arts training is nothing new, regardless of the martial art you study, the principles of motion remain the same, you simply cannot change the laws of physics. Depending on the system you practice, or who the instructor is, they may teach a slightly different way to execute a technique or to do the same thing, but, so long as it contains power generating principles that use logic and common sense, then you are being taught Kenpo.

You cannot change the basic principles of motion that are universally applied regardless of the system being studied or who is teaching it. Making sure you rotate your hips to generate power, whilst keeping your guard up, is a BASIC FUNDAMENTAL that can be applied to all systems. A punch in Kenpo if delivered correctly, will generate as much damage to an opponent as a punch thrown by a Thai Boxer or an M.M.A fighter. Basic principles of motion remain the same for all forms of combat, they do however need to be applied consistently to ensure the effectiveness of your blocks and strikes when fighting.

Many styles will teach low kicks, whilst other systems will concentrate on high kicks, punches, and sparring. However, they are all bound by the same scientific principles that include GRAVITATIONAL MARRIAGE, TORQUE, BACKUP MASS, and SPEED. Without the defined application of proven principles, you are just flailing your arms and legs around in an uncontrolled fashion.

Principles give meaning and definition to what you are doing, and how your blocks and strikes should be applied. Principles form the base of all your movement, the more principles you can apply whilst you fight, the more power will be generated. Although the objective is to apply all of these principles at the same time, the reality is that you may only be able to apply some, but not all of them. You will, however, find that there are certain principles that are always used, regardless of the technique being applied or the position your opponent is in.

These can be considered as priority principles that will always rise to the top of your list when being used. Principles that automatically generate power such as Gravitational Marriage, Backup Mass, and Torque when used with correct breathing techniques will solidify your posture and stance resulting in a more powerful practitioner.

What must accompany principles is the ability to move freely and to think for yourself. Having a thorough understanding and knowledge of various combat scenarios and how to react to them is also an important part of the training. Principles of technique application enable the student to practice the self-defense techniques whilst studying set combat situations. Whereas forms and sets enable us to format an indexing system for the basic fundamental movements of the art when practicing without a partner.

Forms however, enable us to practice the same principles of technique without the fear of being hit or injured and should be likened to shadow boxing where you spar in the air with an imaginary opponent and victoriously beat him every time.

The above principles, and how you apply them are the most important thing to practice, they are Priority Principles.

The above principles are not the only thing to consider in combat, but they do provide the practitioner with the ingredients to produce maximum power in the shortest time possible.